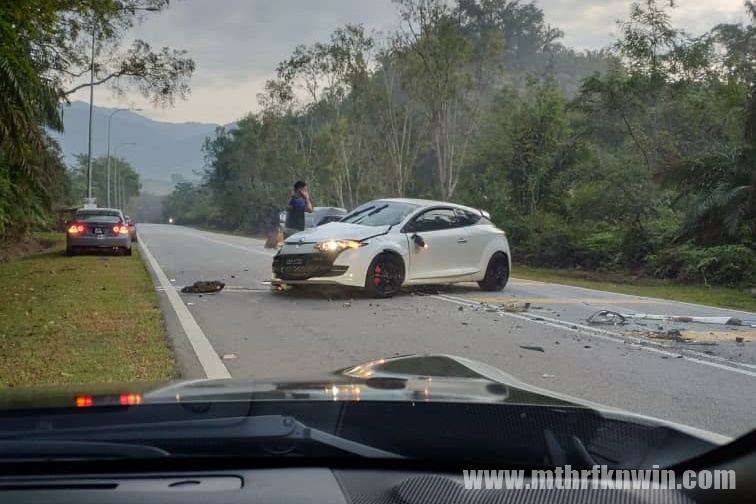 Over the last year, I would consider myself to be a ‘regular’ on Sundays, up Ulu Yam towards Genting Highlands. Like myself, if you are a frequent participant of #uluyamsundays then you are no doubt in one (or some) of the many Whatsapp group-chats and are already aware of the incident which happened yesterday. In true Malaysian fashion, this has spurred a backlash with an accompanying barrage of comments, opinion and critique from Malaysian netizens.

The photo above was originally taken by Facebook user Brandon Kai (thanks for letting us use it!) who was several cars behind said Megane, and has been shared a multitude of times across the many various social media networks. It shows a Renault Megane RS250 Cup which has obviously been involved in an accident, smack in the middle of a two-lane road. Specifically, this was on the second stage, roughly 5 mins after the traffic lights.

It is incredibly easy for the general public to lecture and spew advise on how we should “keep it at track” or “join a sanctioned touge event“. What these people don’t know is that, for many of us, we simply are not engaging in a street race — it is merely an avenue for many of us to de-stress, forget about or troubles in the office(s), and that scenic route for a nice plate of roti canai (with some of the best fish head curry around).

Heck, I go alone most Sundays and know of several groups of people (whom I now consider friends) who keep to not just their personal limits, but also safely within traffic regulations. Yes, contrary to popular Malaysian netizen lore, not every driver on Ulu Yam is a speed demon or speed junkie looking to get a fix. No need to condemn or generalize the rest of us.

Look, I am not here trying to police anybody who’s out to get their dose of adrenaline (or breakfast fix) on Ulu Yam, but I maintain several important rules which I try my best to adhere to:
1. This is not a race – there are no prizes for being first to reach the top
2. Respect the folks in UY town – slow down, don’t rev your engines
3. Do not tailgate the car in front of you — no points for causing an accident
4. If you are holding up traffic, find a safe spot to slow down to allow the car(s) behind to pass
5. Know your limits – you don’t have to corner at the same speed as the car(s) ahead of you

Always remember you are on a public road, with other users, and that safety should always be the priority. We’ve said it before and I’ll say it again — you’re free to wreck your car in any way that you want, just do it alone and make sure this is not at the expense of other motorists. There is a difference between spirited driving and on-the-limit driving (the latter of which really is stupid, especially when on a public road).

Have your fun but do try to leave some room for error because (unless you are a credible fortune teller) you can never predict another driver’s mistakes. That’s why they’re called accidents, right?